Art and Fashion come together in Valencia

Today starts the exhibition ‘Between Scenes. Art and Fashion ‘, sponsored by Pedro del Hierro and organized by the Instituto Valencia d’Art Modern (IVAM). It will remain open until October 20, 2013. 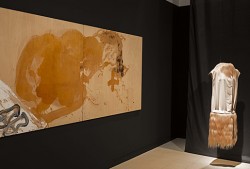 The exhibition, part of the multidisciplinary project ‘Viva Valencia’, shows how the creations of 25 leading contemporary designers mingle with works from the collection of the IVAM, according to their affinities plastic, chromatic, and conceptual. The exhibition aims to illustrate the expression of conflicting emotions and related at once: nostalgia for the past and hope that  the future that may bring about as much work of art, especially in the genre of fashion design.

The exhibition includes a catalog of the works exhibited and contains texts by Consuelo Ciscar, director of IVAM, Maria de Leon Castillejo, curator of the exhibition, and fashion experts, Carlos Soler and Josep Lozano. 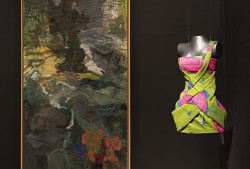 Art and fashion are more united than ever. There are many designers who create collections based on the works of established artists. The curator of the exhibition, Maria de Leon Castillejo, quoted as referring to Yves Saint Laurent with Mondrian and Van Gogh, Dolce & Gabanna with Jackson Pollock, Warhol Dior, Oscar de la Renta with Picasso or impressionism that rose to the catwalks in 2010 collections Lacroix, Valentino and Marc Jacobs.

More recent is finding inspiration in the painter Nicolas Vaudelet Joaquin Sorolla for making the costumes for the reassembly of the National Ballet of Spain.

Moreover, fashion has also inspired art. An example is the Japanese artist Yayoi Kusama, who stamped their moles in scarves, handbags, sunglasses, shoes and coats Louis Vuitton, while exposing a retrospective of his work at the Whitney Museum in New York. 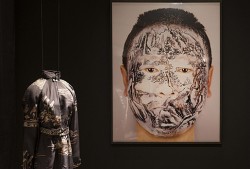 Going back more in time, we must remember to Mariano Fortuny, painter, photographer, sculptor, architect, stage designer … and designer, who rallied to the world of fashion taste for ancient Greece, innovated in tinting of the fabrics and prints and filled with air vanguard aesthetics of the early twentieth century.

We must also mention the likes of Peggy Guggenheim, one of the patron par excellence of the twentieth century discoverer of Jackson Pollock, who became a fashion icon without trying. Peggy was among the first to hybridize artists and designers: mentored Fortuny, which fascinated him his clothes style pleated Delphos, and among his most famous photos include those in which posing with sunglasses butterfly-shaped, created by painter and sculptor Edward Melcarth in 1966.

Diana Vreeland was another women who has exemplified the constant transfer of ideas and inspiration between fashion and art. Creator of the concept “fashion editor” exemplifies his successor now quintessential Anna Wintour, Vreeland turned Harper’s Bazaar and Vogue until 1971. A year later, would the Costume Institute of the Metropolitan Museum of New York, who owes some of its most successful and imaginative exhibitions, including The World of Balenciaga (1973), Romantic and glamorous Hollywood design (1974) and The Glory of Russian Costume (1976). 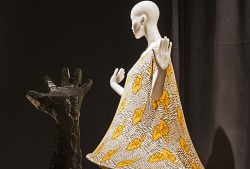 Among the contemporary artists who have been merged his work with fashion figure Dalí, whose collaborations with Paco Rabanne may be exposed at Robert Berman Gallery in Los Angeles in a photographic exhibition of the Swiss Jean Clemmer.

Finally, Maria de Leon highlights the key role in achieving this show, by displaying the art of designer Pedro del Hierro which highlights the sleek architecture of their creations.

← 151st Anniversary of the Birth of Gustav Klimt
World Canvas →

One Reply to “Art and Fashion come together in Valencia”