The Undoing´s success lies in its Artwork 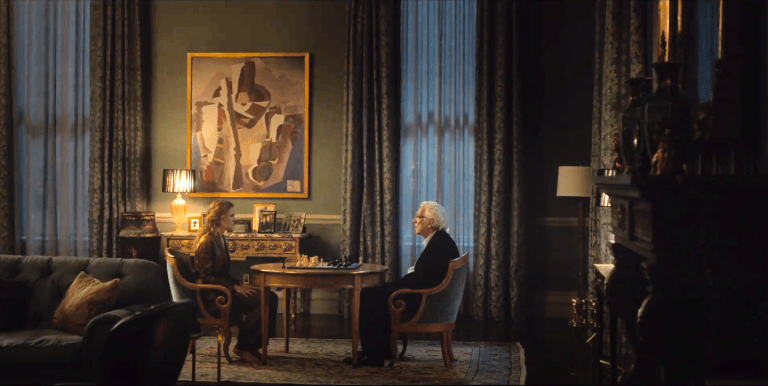 Many things can be attributed to the success of HBO´s The Undoing, which since its launch has smashed viewing records. A perfect whodunnit that feeds our fascination with the ultra-wealthy and the drama that ultimately leads to their undoing. However for me, The Undoing´s success lies in its Artwork.

The Undoing, a six episode miniseries starring Nicole Kidman and Hugh Grant, is based on Jean Hanff Korelitz’s 2014 novel “You Should Have Known” and adapted by writer and executive producer David E Kelley. The Undoingcommences with the perfect lives of therapist Grace (Kidman) and paediatric oncologist Jonathan Fraser (Grant). The violent murder of a mother from the elite school, which their son, Henry attends, soon bursts their blissful bubble, unleashing a cascade of fear, deception and betrayal.

Lets take a look at the artworks, 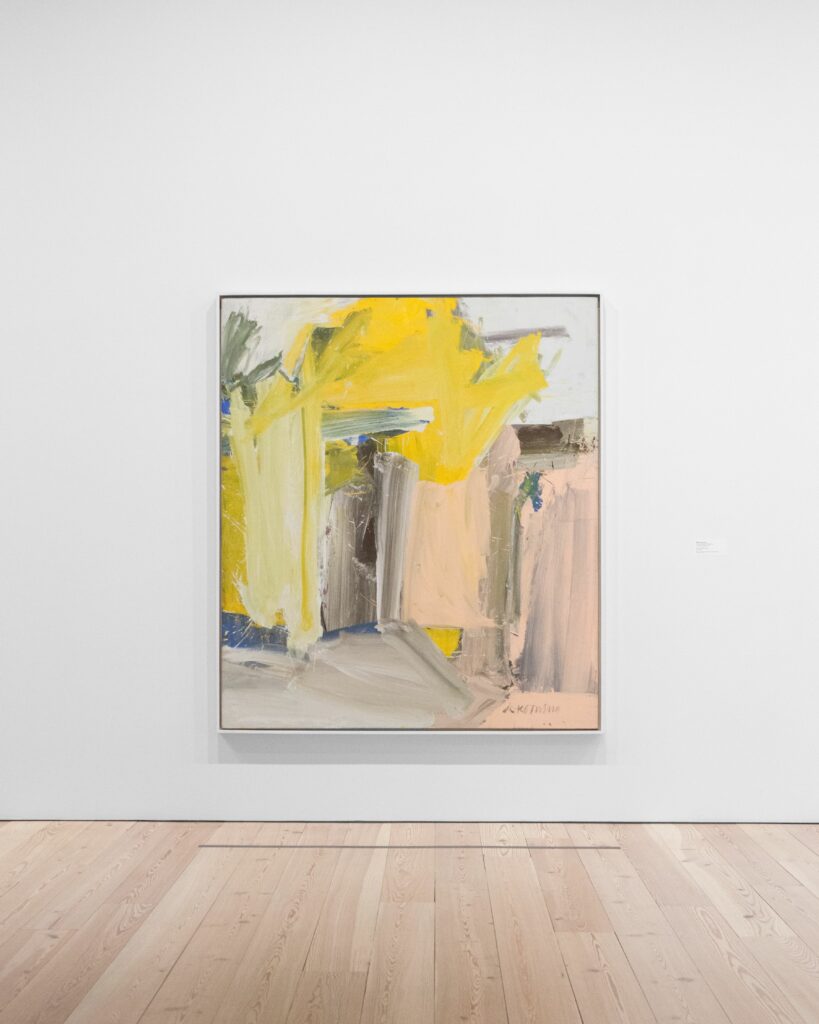 The painting with its broad brushstrokes of pink, yellow, brown and white form a door-like rectangle in the center of the canvas evoking a sensation of exclusion, being outside looking in. 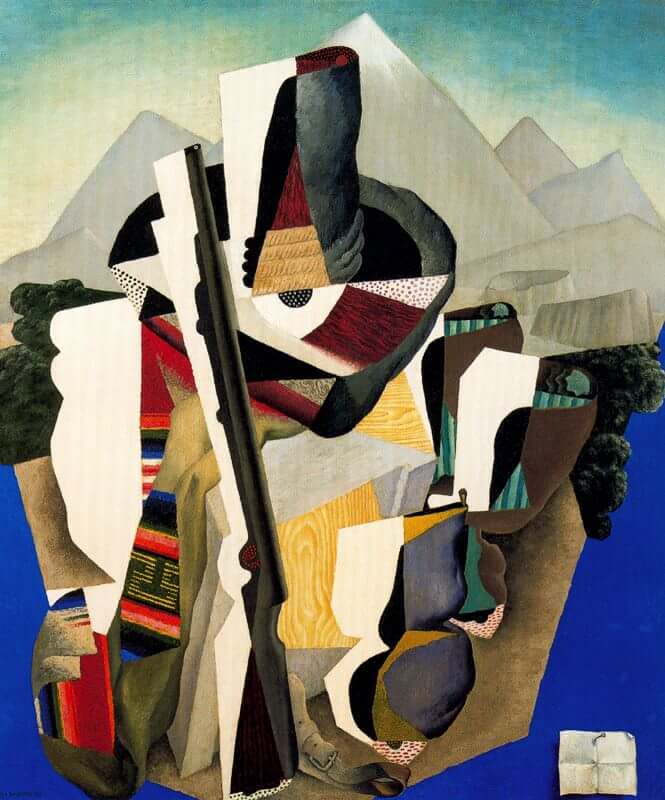 Rivera´s Cubist masterpiece captures his Mexican identity and homeland whilst he was living abroad in Paris. Elements of this still life include a serape, a sombrero, a rifle, a cartridge belt, a wooden ammunition box, and the mountains of Mexico. 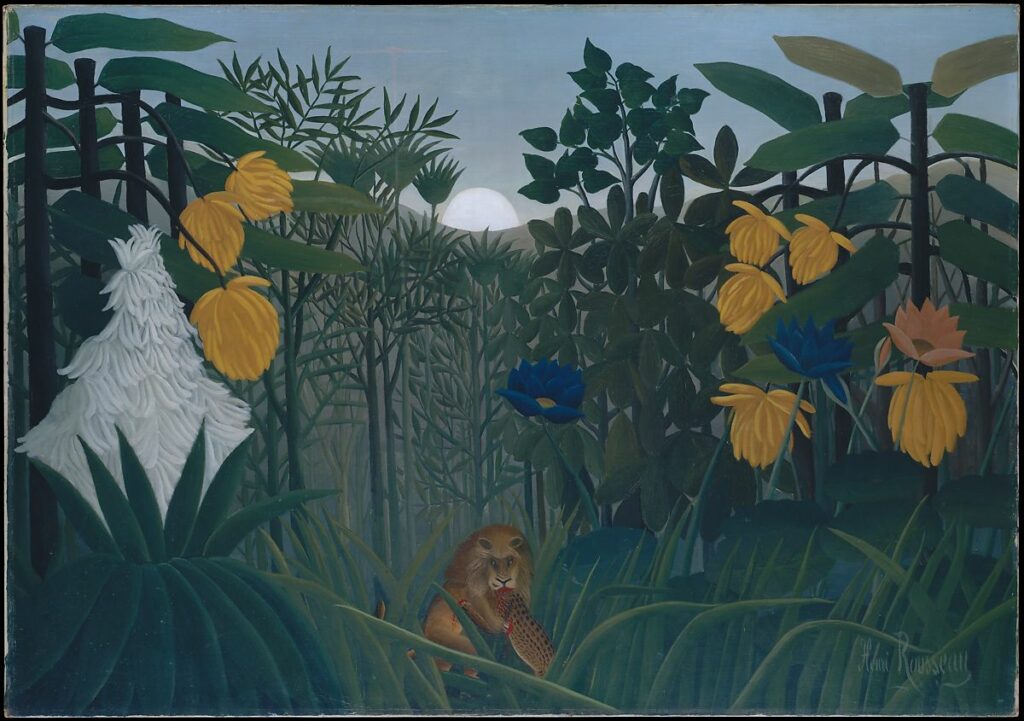 Amid the dense tropical jungle with blue and yellow flowers is a lion devouring its prey, a spotted jaguar. The lion stands upright like a human whilst the sun behind him rises yet casts no illumination. 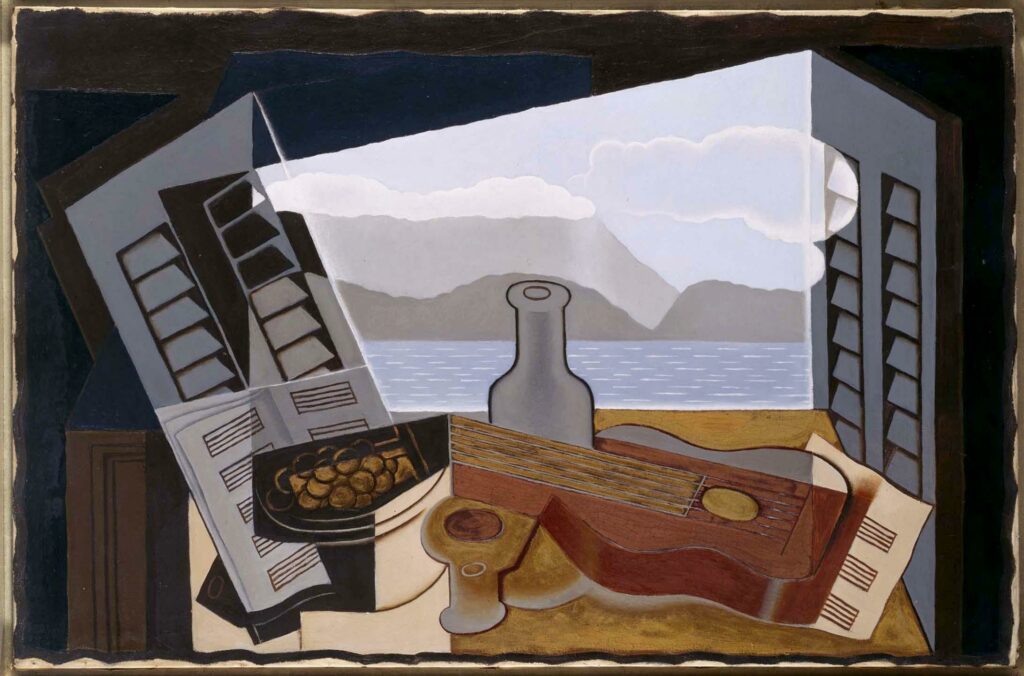 The painting is divided into two unequal parts – the interior being the larger of the two and given more detail. However it is the outside that captures the audience’s attention and reveals itself as the true protagonist. 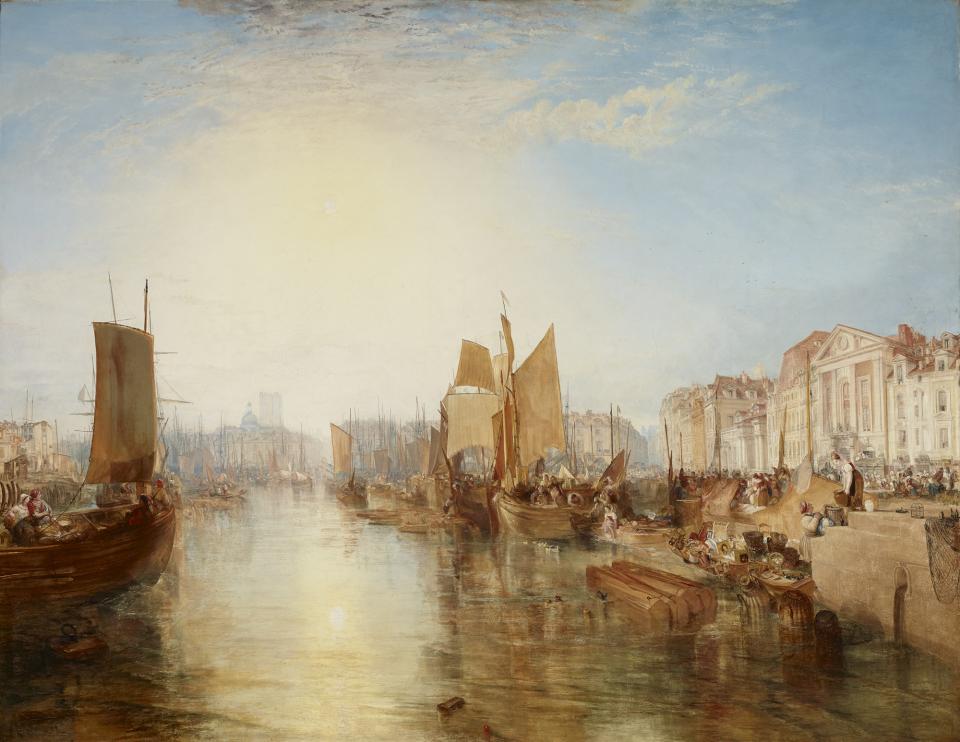 Turner presents a romantic, golden chaotic view of the town. It has vibrant energy and shows a place subjected to constant change. The work draws from sketches made on site, as well as from memory and imagination. 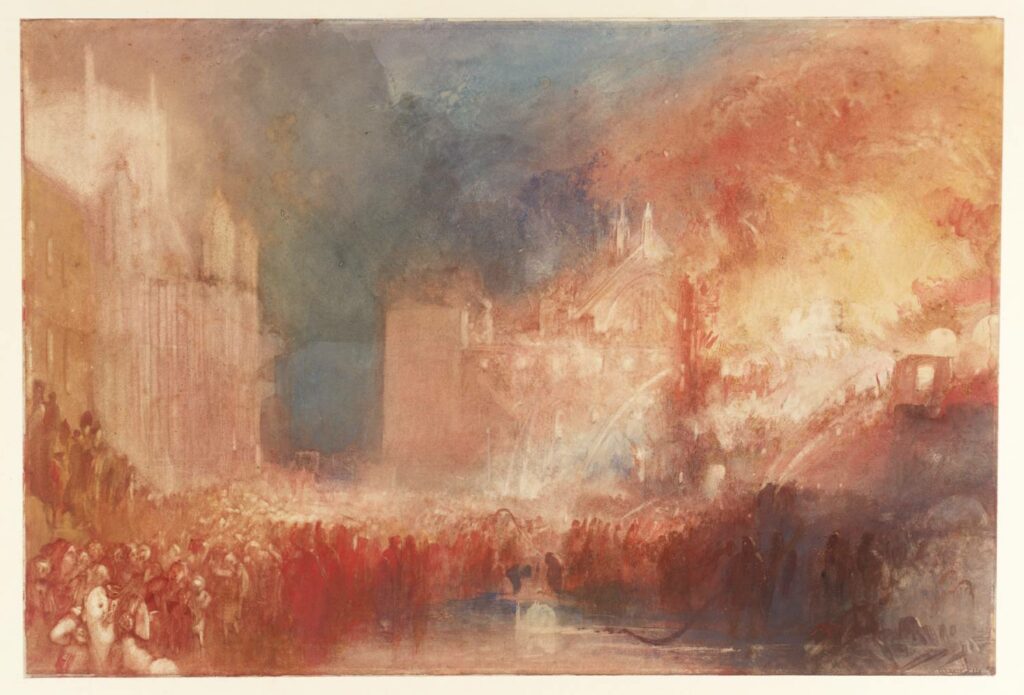 The catastrophic fire, which destroyed much of the Palace of Westminster in central London, including the Houses of Lords and Commons, broke out on the evening of 16 October 1834. Turner is recorded as having been an eyewitness among thousands.

Vincenzo Anastagi – a high-ranking noble military commander in Perugia, in 1531. He became a Knight of Malta and was best known for his contribution to the victory against the Ottoman Turks during the Siege of Malta in 1565.

Vigorous brushstrokes, and a proletarian subject matter, offer a pervasive darkness and introduce a note of harsh realism to gritty modern living.

Paolo Veronese The Choice Between Virtue and Vice (ca. 1565)

Hercules caught in between a path of ease and pleasure or Virtue, a path leading to true happiness — a moral lesson underlined by the motto on the entablature at upper left: [HO]NOR ET VIRTUS/[P]OST MORTE FLORET (Honor and Virtue Flourish after Death). 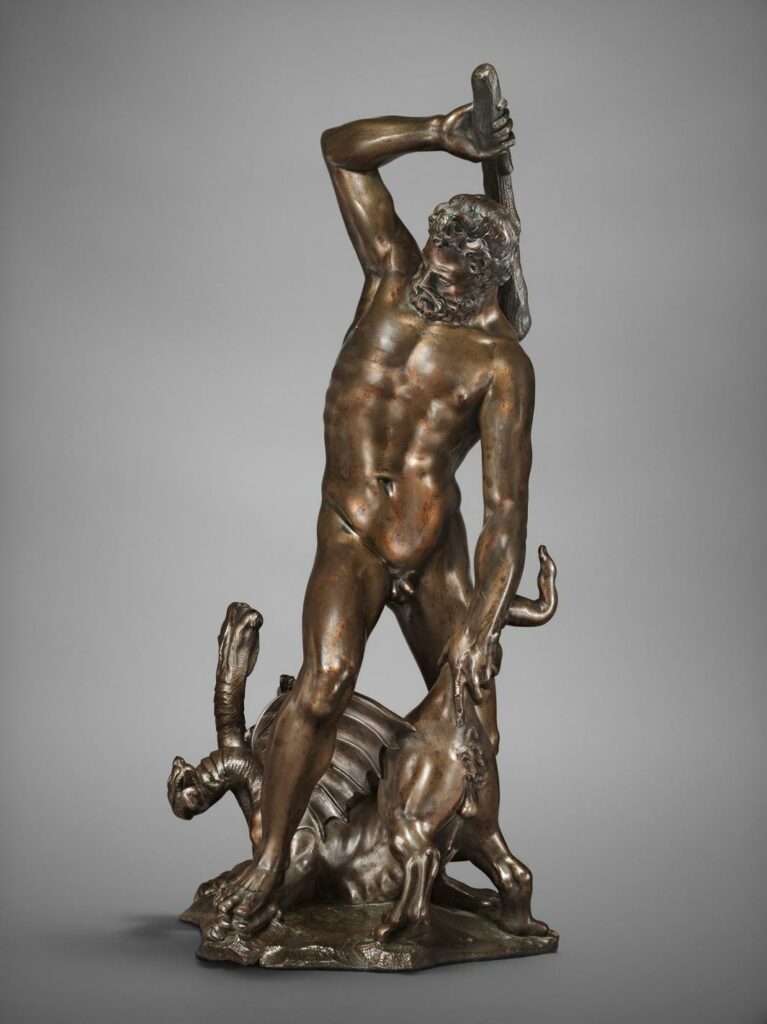 Hercules and the Hydra (mid-17th century),

The Hydra was a serpent-like water monster with nine heads. It was an offspring of Typhon and Echidna bred by Hera to kill Hercules. It was Hercules responsibility to slay the beast during his twelve Labors for King Eurystheus. The labors were his punishment for killing his wife and six sons after Hera had driven him temporarily mad. The Hydra was Hercules second labor. He attempted to cut off the heads of the beast but every time one was cut off, two more would grow back in its place. Another challenge in killing the Hydra was that its’ breath was poisonous to all who crossed its path. After many attempts at cutting off the Hydra’s heads, he distracted it by firing fiery arrows into the monsters lair. Hera sent a giant crab to distract Hercules who then sought his nephews’ assistance in killing the crab. His nephew handed him Athena’s golden sword, which was successful in cutting off the Hydra’s one immortal head. Hercules then dipped his arrows into the Hydra’s blood and placed its head under the rock between Lerna and Elaius, a sacred path.

Nessus was a centaur, part man and part horse, who set himself up as the ferryman on the river Euenos, in western Greece. One day, Deianeira, the beautiful wife of Heracles (Hercules), wanted to cross the river, so she mounted Nessus’ back and he took her across. When he was doing so, he decided to try to abduct and rape her. However, Heracles was on the bank of the river which they had just left, and heard Deianeira’s cries. He drew his bow and shot Nessus in the breast with an arrow whose tip was poisoned with the blood of Hydra.

As Nessus lay dying, in an act of revenge, he told Deianeira that his blood would act as a love charm to ensure that Heracles would be true to her forever, which she foolishly believed. (Classical audiences would have already known that the blood of centaurs was extremely poisonous.) She collected his blood, and kept it ready for use. Some years later, Heracles was having an affair with the young and beautiful Iole. When Deianeira discovered this, she spread Nessus’ blood on a shirt (chiton), which she gave to her husband to wear, in the hope that it would bring him back to her.

When Heracles was away, Deianeira accidentally spilt some of Nessus’ blood on the floor, where it lay smoking in the light of dawn. She realized that Nessus had tricked her, and that his blood would harm Heracles. She sent a messenger to warn him, but that was too late for Heracles, whose body had been horribly burned by the shirt. Heracles took himself out to die a noble death on a pyre of oak branches. Zeus took him to Mount Olympus, where he was acclaimed for his many heroic adventures. 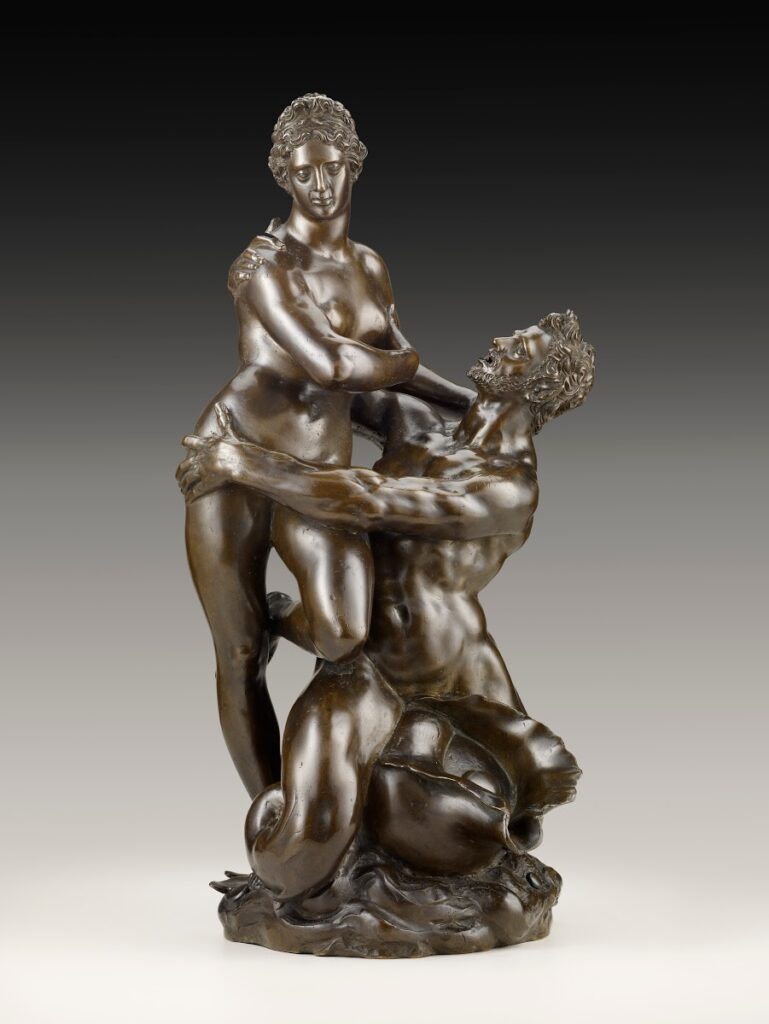 Triton was the son of Poseidon and Amphitrite. He was the ruler of the depths of the sea and dwelt with his parents in underwater golden palaces. Nereids are creatures that symbolize everything that is beautiful and kind about the sea. Their melodious voices sang as they danced around their father. They are represented as very beautiful girls, crowned with branches of red coral and dressed in white silk robes trimmed with gold, but who went barefoot. They were part of Poseidon’s entourage and carried his trident. It is unsure if Triton is embracing the impassive, heroic sea nymph or capturing her as he could be depicted as either dreadful or mighty. 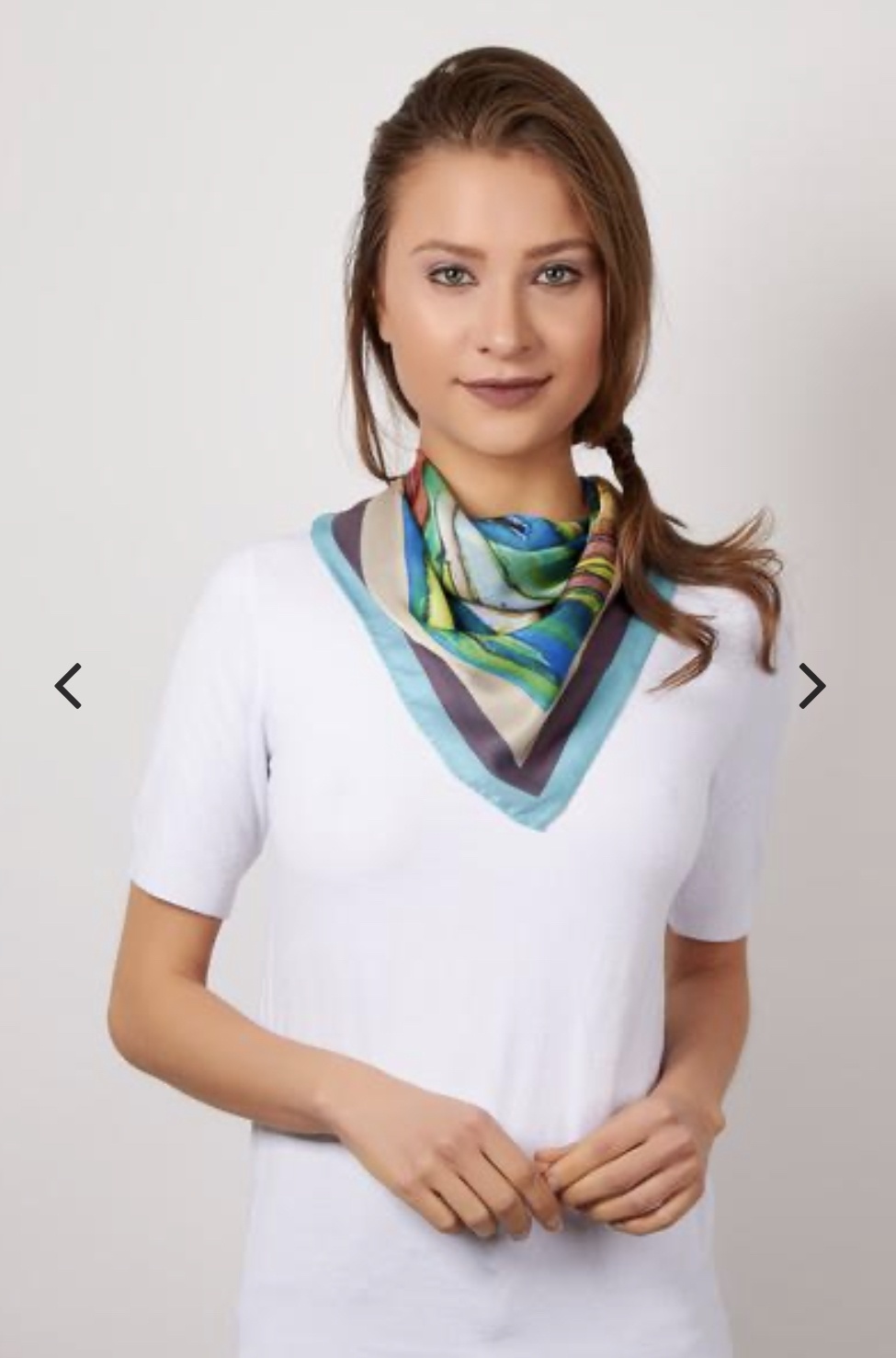 By clicking on "Allow all cookies", you agree to the use of cookies and other trackers to (i) show you personalized content and ads based on your browsing, your profile and the data you have provided us, and to (ii) measure and analyze the use of our services. Some data could be shared with our partners. For more details read our Policy Disclaimer. Privacy Disclaimer