151st Anniversary of the Birth of Gustav Klimt

151st anniversary of the birth of Gustav Klimt

One of my all time favourite painters, Gustav Klimt an Austrian Symbolist painter and one of the most prominent members of the Vienna Art Nouveau (Vienna Secession) movement.  His paintings embody true creative expressions, which have managed to keep attracting art lovers for centuries. His major works include paintings, murals, sketches, and other art objects, many of which are on display in the Vienna Secession gallery. Klimt’s primary subject was the female body, and his works are marked by a frank eroticism. His work can also be found at the Gustav Klimt museum, a virtual paintings museum showcasing the most beautiful artworks or paintings of artist Klimt. On display are the Beethoven Frieze, Stoclet Frieze, Litzlberg on Lake Attersee paintings, considered the most cherished of all the Klimt artwork. The online Klimt gallery also displays the Kiss Klimt painting, a beautiful conventional oil painting renowned for the most detailed, colourful and best expression of the female model artwork done in painting with applied layers of gold leaf, a spectacular piece. 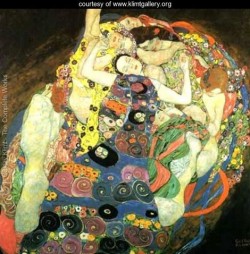 Klimt was born in Baumgarten, near Vienna, the second of seven children, three boys and four girls. All three sons displayed artistic talent early on. His father, Ernst Klimt, formerly from Bohemia, was a gold engraver. Ernst married Anna Klimt (nee Finster), whose unrealized ambition was to be a musical performer. Klimt lived in poverty for most of his childhood, as work was scarce and the economy difficult for immigrants. Klimt began his artistic studies in 1876 after being awarded a scholarship to the Vienna School of Arts and Crafts, the institute where he studied until 1883. There he was trained as an architectural painter, creating work that leaned more toward the academic, conservative side of art. 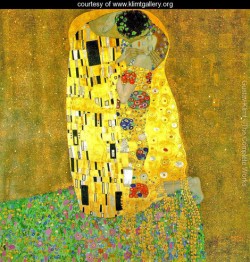 In the late 1890s, Klimt’s career veered more toward the unconventional, “Philosophy,” “Medicine,” and “Jurisprudence” –are paintings that were all deemed radical and even pornographic. Consequently the works were rejected and this project turned out to be Klimt’s last acceptance of a public commission. This did little to deter Klimt’s interest in painting figures as his style continued to develop. Klimt soon embarked upon his “Golden Phase,” a period of his career marked by the use of gold leaf.

Something that still marks his unique style, along with his dreamy attention to the female form and mosaic-like portrayal of fabrics and texture. It was at this time that the artist created his most iconic works, including “The Kiss” and the “Portrait of Adele Bloch-Bauer I.” Inspired by the golden aspects of Byzantine art located in Venice and Ravenna, Klimt’s love of all things gilded fed his obsession with costumery, leading to five decadent paintings of society women draped in fur, created between 1907 and 1909. 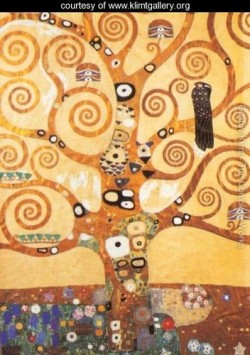 After his death, Klimt’s work has soared to record-breaking prices, bought by museums and private buyers around the world.

← Giacometti, Fields of Play
Art and Fashion come together in Valencia →